Camels and the cellphone tower 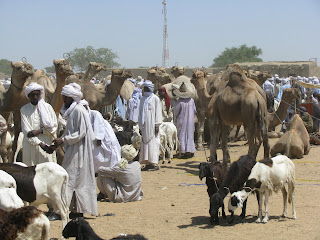 Copyright V. Angelo
This is the new Africa: Old markets, in the remoteness of the sandy plains, and cellphone connections, all over. 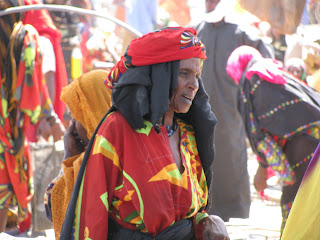 Copyright V. Angelo
Karme', small town in the middle of a drought-stricken plain, the Sunday market brings people together and gives them a sense of belonging.
Later in the day, one goes back to one's isolation, taking the roads the cattle and the small ruminants borrow, in search of water and grass.

Discussing with Adada and Bassole' in Asmara, in the framework of the Sudan and Chad consultations 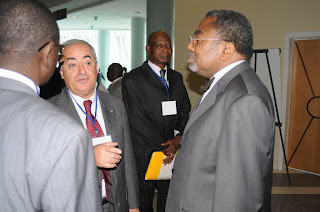 I spent most of the day preparing for my trip to New York, which will start on Tuesday.

I will be addressing the Security Council on matters related to Chad. To Eastern Chad actually, because my mandate has nothing to do with the domestic political process that is taking place in the country. I am supposed to focus just on the security situation in area along the border with Darfur.

Listening to the refugees

In and around Farchana, in the Ouaddai Region of Eastern Chad, there are four refugee camps, with a total of 87,000 people. They came from Darfur, in Sudan, the first batch in 2004 and they are still crossing in.

I spent time today listening to some of their representatives. They all would like to go back home and rebuild their lives. But they know that the Darfur situation is too complex and they might have to wait for a long while.

In the meantime, the resources to take care of them are getting thinner. Less money for food, for instance. The classrooms are too big, to save on teachers and materials, but how much can each one learn, if the class is about 150 children? Then, the women complained that they have not received any soap for the last two months. The malaria season is at its peak and there is not enough medicine.

But all in all, security remains the key issue. Outside the camps, for sure, but also inside. The national gendarmerie is doing its bit, but they lack resources, men, supervision and motivation. The local administration is well informed but there is no supporting structure, no administrative capacity to coordinate, respond or direct.

And nobody is ever brought to justice.

The deployment of the new generation of Police and Gendarmes, trained by MINURCAT, has to take place soon. Certainly before the end of the rainy season. The first group is now ready, but there is still some legal red tape to be addressed.

Farchana is a town close to the border with Darfur. We have a number of refugee camps and displaced Chadians sitting in the area. They feel unsecure, as the humanitarian workers do too.

I will be visiting there tomorrow for the first time. It's muddy at this time of the year, but the region is also very muddy, above all during the dry season, when we think of the politics and armed conflicts that happen around the area.